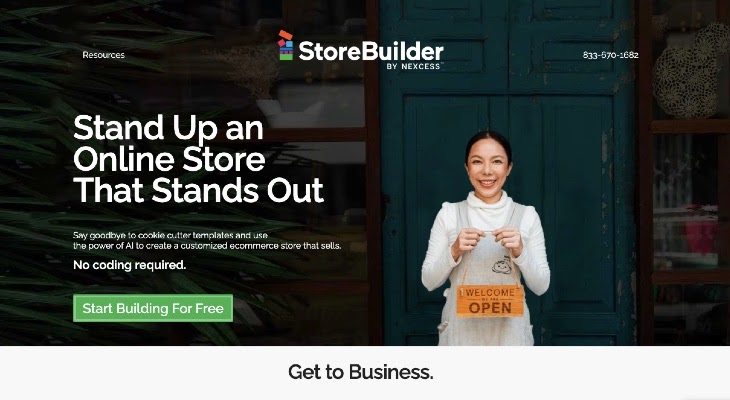 It is unlikely that the rate of digital commerce adoption would slow down soon. Thus, the StoreBuilder platform will provide sellers a straight-forward solution to easily migrate their physical stores to digital storefronts.

StoreBuilder complements Nexcess’s array of managed content and commerce hosting products by providing a way to build a WooCommerce store, start to finish, without the complexities of WordPress customization.

What Is StoreBuilder and Why Should You Care?

Being built on the WooCommerce engine, which relies heavily on the popular and well-used WordPress, StoreBuilder will enable SMBs and developers to create an entirely reactive storefront by just clicking and dropping site elements (or blocks) however they want.

This tool would naturally have the ability to cut down development time to a fraction. StoreBuilder utilizes Nexcess’s over 20 years of experience in ecommerce solutions to deliver an intuitive and nav-easy homepage in only minutes.

Initially, WooCommerce exists as a WordPress plugin, which means developers had to build ecommerce sites on WordPress using the plugin’s functionality to enable selling, checkout, and store management functionalities.

Developers could now directly build their WooCommerce stores using StoreBuilder without any of the hassle associated with the WordPress system and without writing any codes.

Businesses and developers who are already Nexess’s managed WooCommerce hosting users can get StoreBuilder as a free feature of their hosting package. Nexcess’s managed ecommerce site hosting just got better with all that functionality.

Also, as part of the promotions for the StoreBuilder launch, Nexcess is allowing developers a one-month free use of the product. Users can choose to pay for StoreBuilder’s $19/month one-subscription-for-everyone plan when the one-month free trial has elapsed, or cancel their account.

What Can StoreBuilder Do?

“StoreBuilder creates a one-of-a-kind storefront faster than any other solution in the market,” said Chris Lema, VP of Products at Nexcess. Which is to be expected from a no-code developer.

But, what makes StoreBuilder stand out is that its build on a powerful AI engine, making the provision for building truly unique and smart stores.

“Templates on ecommerce platforms are everywhere, often making one store look like another,”

Nexcess plans to give every storefront a unique look different from most over-used free ecommerce templates.

Nexcess, part of the Liquid Web family of brands and a global open-source ecommerce leader, provides content and commerce cloud hosting services with products such as managed Magento, WordPress, and WooCommerce hosting.

Nexcess enables enterprises, agencies, and brands of all sizes grow their business through secure hosting and digital migration to reach more buyers, no matter the industry.

Learn more about Nexcess and LiquidWeb in our review.