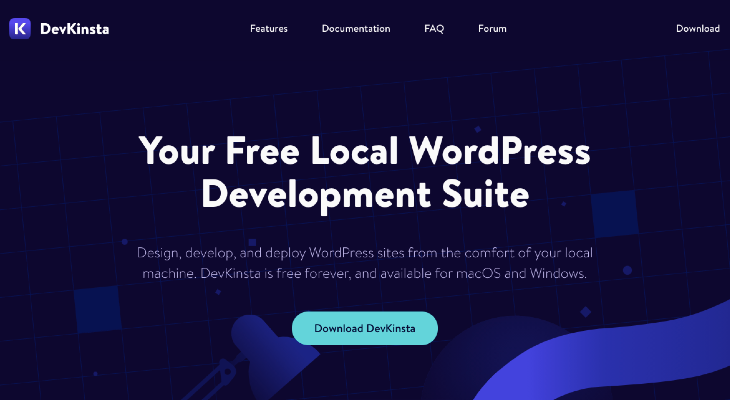 Kinsta announced the release of its local development environment for WordPress sites earlier in January 2021.

The tool, called DevKinsta, enables developers to build, run, and deploy WordPress sites, including multisite designs, in little time. It takes less than an hour to build a new site on DevKinsta.

For WordPress developers who enjoy the safety of building and testing on their local machines before deploying on a live server, DevKinsta satisfies that need.

DevKinsta is a free local development tool—no subscription-based plans needed, not even a one-time payment.

It’s most likely Kinsta’s way of upselling their hosting services to developers and DevKinsta users by leveraging the extensive integration of extra Kinsta features on the local tool.

Developers are saying that DevKinsta is the easiest local development site they’ve ever set up. In comparison to XAMPP and Local by Flywheel, developers say that installing and running DevKinsta for the first time was faster.

However, it does run a lot smoother on more powerful versions of Windows and macOS, like Windows 10 or the macOS Big Sur. But, this is normal for a tool that installs full server functionality on your local machine.

DevKinsta is Designed For Everyone

Developers, theme designers, DevOps agencies, and freelance developers can build on DevKinsta by

All on your local machine.

Kinsta designed this solution to be easy for beginners who’ve never built a WordPress site in a local development area.

However, DevKinsta, like Local by Flywheel and most local environments, are built by hosting providers to interface smoothly with their infrastructure. For instance, you can import live WP sites to DevKinsta only if Kinsta hosts them.

DevKinsta comes with Adminer, the open-source functionality for database management.

With the first version of the system, developers can easily click to test HTTPS support on their sites. It’s super easy to run wp_debug on the interface.

DevKinsta may not yet have all the pro features you’re used to, but Tom Zsomborgi, Kinsta’s Chief Business Officer promises they are working to bring these tools to DevKinsta.

“We have a dedicated development team supporting and adding a lot of new features to the tool.”

When you create, design, or customize a WordPress site on DevKinsta, deployment uses these three default configurations:

Like I’ve pointed out in the previous sections, deploying directly to Kinsta’s hosting service is a lot smoother and only requires a few clicks. However, as long as your site runs well on DevKinsta, you should encounter minimal to zero issues deploying onto other hosting services.

The main challenge would most likely be figuring out the right FTP to use.

How Does DevKinsta Compare with Other Local Development Tools?

One advantage of DevKinsta over its competitor local development systems would be how DevKinsta achieves containerization.

DevKinsta, right from the start, uses Docker, which is installed directly on your local machine once you download and run the DevKinsta Suite installation package. Docker is a lot easier to use than the usual VirtualBox (or VirtualBox + Docker) alternative, which most local tools employ.

Docker achieves smoother containerization of your developer elements and apps—completely isolating your development plugins from the host OS. One of the benefits of this would be to use tools not supported on your local machine OS.

DevKinsta supports recent PHP versions, PHP 7.2 to 8.0. You can switch PHP versions for your sites and build multiple sites at once.

Is Kinsta Worth It?

If you’d rather get unbiased server-level data about the performance of hosting services, like Kinsta, then HostScore is good for you. We’ve recently analyzed Kinsta’s performance and provide regular performance updates, get the details here.